A delegation of four Polish experts visited the Faculty of Economic and Management Sciences at the North-West University. This visit not only speaks to the university’s internationalisation drive but also its vision to be a research home for both national and international experts. The delegation is made up of Prof Beata Ślusarczyk and Prof Sebastian Kot, both from the Czestochowa University of Technology, Prof Andrzej Sztando from Wroclaw University of Economics, and Prof WŁodzimierz Sroka from the WSB University.

TRADE, in cooperation with TRADE Advisory, hosted a two-day TRADE-DSM® User Group Conference (its sixth one to date) from 29 and 30 October 2019 for TRADE-DSM® subscribers, as well as selected academics and members of the business community. Keynote speakers included Dr Maarten Smeets (from the Institute for Training and Technical Cooperation at the World Trade Organisation in Geneva, Switzerland), Dr Julia Spies (from the Trade and Market Intelligence Section at the International Trade Centre in Geneva, Switzerland), Dr Jonathan Calof (from the Telfer School of Management at the University of Ottawa in Canada) and Dr Johan van den Heever (from the Bank of Namibia). For more information see Africa’s development drive: Leveraging the benefits of the AfCFTA and regional integration.

On 17 August 2019, TRADE visited Mahikeng campus as part of a FEMS entities promotion day. The TRADE zone was well attended by staff, post-docs and PhD students. The leader of TRADE on the Mahikeng campus, Prof Ireen Choga also attended the session. A total of 10 people on the campus are currently members of trade. 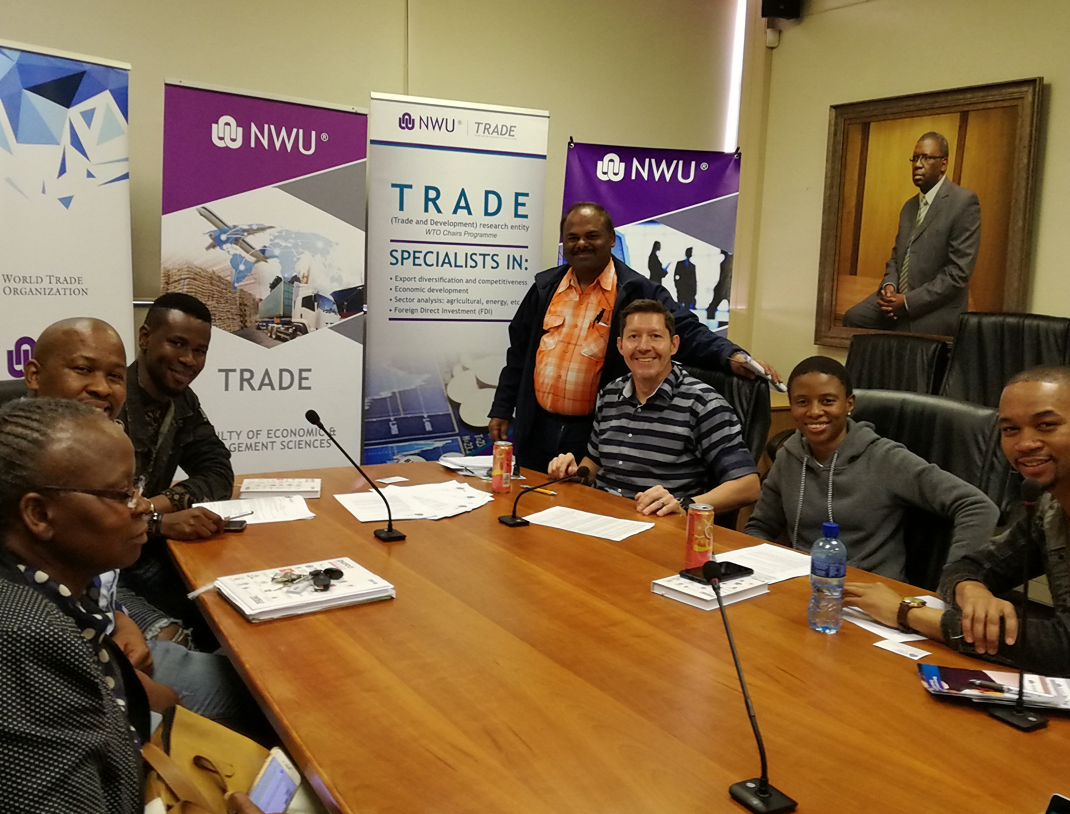 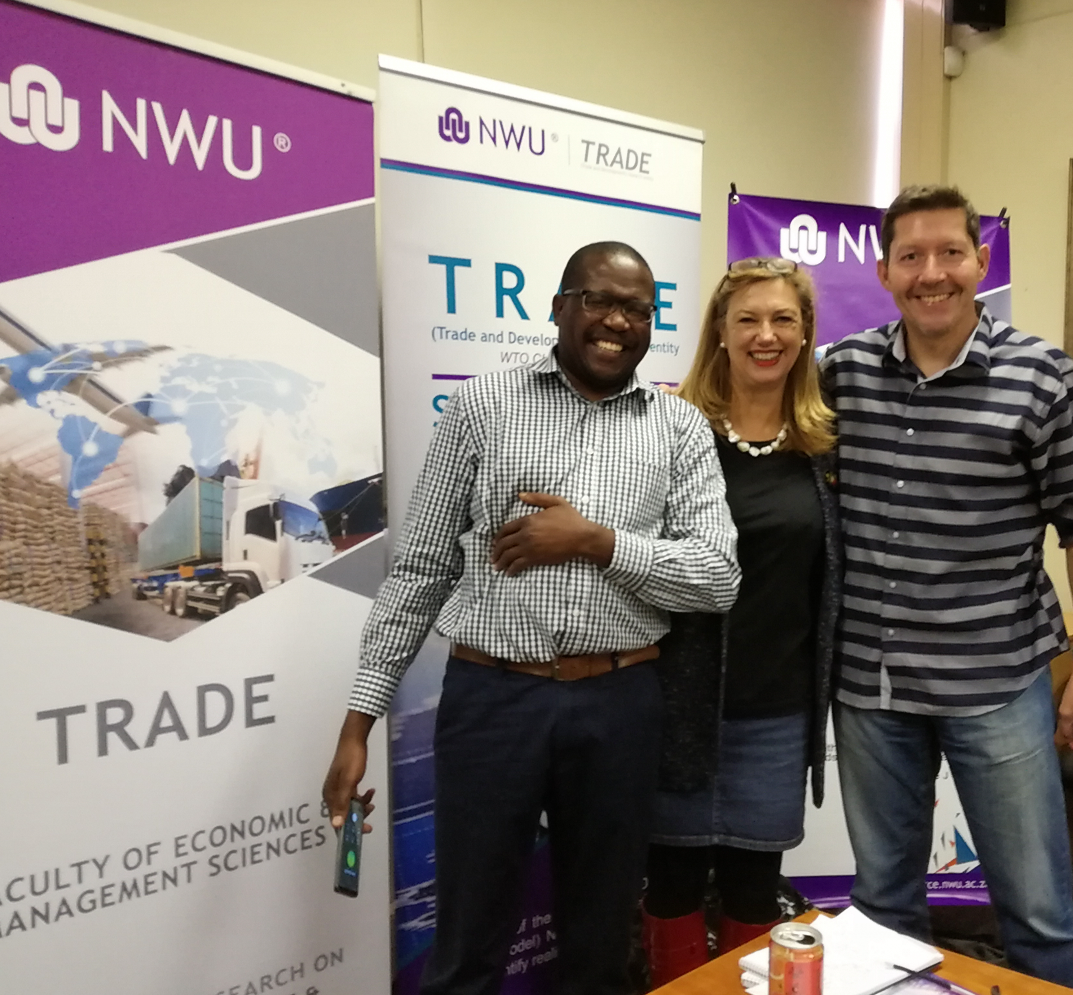 On 11 July 2019, TRADE research entity facilitated its first cross-campus strategic planning workshop. The meeting took place on the Potchefstroom Campus. It was attended by 46 ‘old and new’ TRADE members from across all three North-West University campuses. The TRADE strategic planning workshop was used as a platform to discuss the next five years of TRADE, as well as the way forward for operations and projects within the research entity. The overall purpose of the workshop was to ensure healthy collaboration between the members, to provide information and, through a participative process, to discuss the planning of the entity. The current vision and mission statements as well as the research focus sub-areas were discussed and adjusted to better suit the new TRADE, taking into account new members’ research focuses. Strategies to enable and support research outputs and inter-campus collaboration were discussed. Prof Danie Meyer, the new director of TRADE, led the meeting, but allowed for an inclusive and interactive atmosphere with online and live feedback through the Mentimeter app as well as open-ended discussions and a networking lunch. The TRADE members from across the campuses connected instantly and there was a positive and energetic atmosphere throughout the workshop. An exciting period lays ahead with a new era for the research entity. The strategic plan for TRADE will be released at a launch function during August 2019. Details will be made available at a later stage. 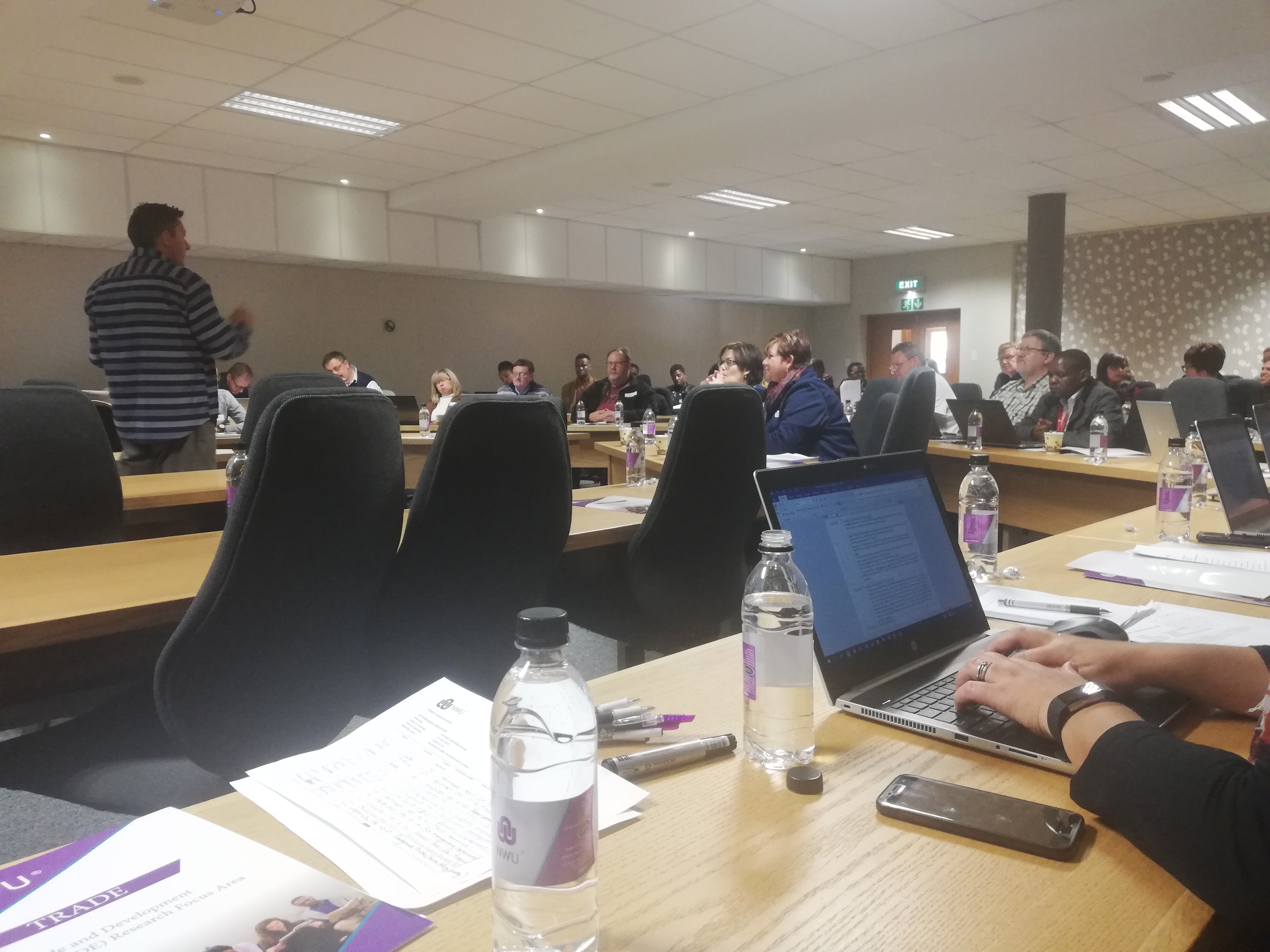 Prof Wilma Viviers (WTO Chair and research professor) and Ali Parry (extraordinary research scientist) tackled some difficult but relevant questions in the paper they presented at the WTO Chairs Programme Annual Conference in Geneva, Switzerland on 2 July 2019. In their paper, titled ‘Are digital advances and inclusive growth compatible goals? Implications for trade policy in developing countries’, they explored what inclusive growth – which is often but sometimes carelessly referred to in commentaries and debates – actually means, drawing on an extensive body of literature that provides both broad descriptions and more nuanced, quantitative measures. They also reflected on the digital era and its various manifestations (including e-commerce, robotics, artificial intelligence, the Internet of Things (IoT) and 3D printing) and whether there is a discernible alignment in the goals and patterns of digital growth and inclusive growth, respectively.

See the report for more information: Are the digital and inclusive growth agendas compatible? Implications for trade policy in developing countries.

Prof Ewert Kleynhans attended the 60th Annual Conference of the New Zealand Association of Economists, which was held at Victoria University, Wellington, New Zealand, during the first week of July 2019. The aim was to conduct research with his research associate, Dr David Dyason, from Christchurch, who is also an extraordinary research scientist at TRADE and a productive researcher. Dr Dyason completed his doctorate last year under Prof Kleynhans’ supervision.

It is winter in New Zealand, and the weather was unpleasant, but they had a number fruitful research days. They presented a paper on their research with the title: “Urban renewal of Christchurch: Unlocking the potential of the student market”. The paper was similar to the impact studies done on the impact of the university on the economy of Potchefstroom, but in New Zealand, it is being applied to the renovation of the central business district of Christchurch, following an earthquake that demolished it three years ago. The paper was well received and led to much reaction. Afterwards, several economis 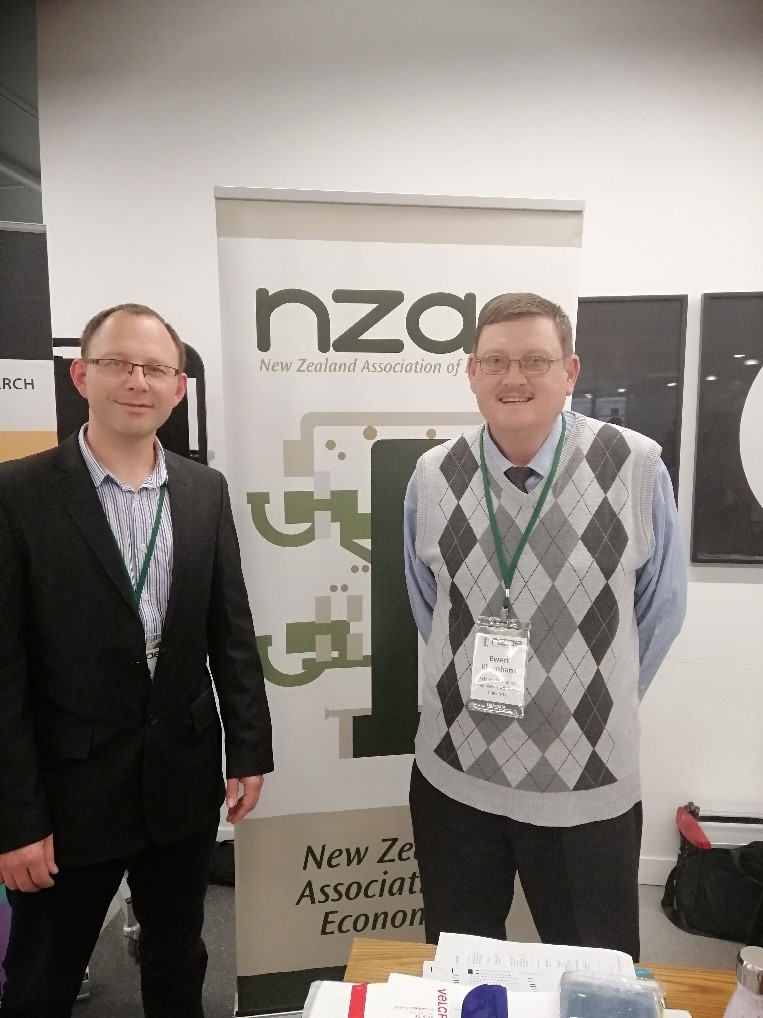 ts and consultants came with more questions and were clearly impressed with the research. Some academia seemed interested to collaborate in their research. Good relations were established and some of the contacts will be followed up in due course. A paper on their presentation following this conference will be published soon. There were also interesting papers read by other academia at the conference.  ​

Prof Steve Dunga attended the IISES Conference from 21 to 24 May 2019, at the University of London, where he presented two papers. The first paper, which was co-authored by Mrs Lerato Mothibi, was titled: “Education and earnings in South Africa: An application of the Mincerian function”. The second paper that Prof Steve authored was titled: “Housing insecurity measure, a development of a validated scale using household data”. The paper on housing insecurity measure is a ground breaking study where they are proposing a unified measure that can be used across contexts. The literature shows that there is a gap in as far as a unified measure of housing insecurity is concerned. Consequently, they are writing a series of papers and collecting data to come up with this measure. This, when successful, will put us on the map as it could be an internationally applicable measure that would go a long way in dealing with housing insecurity as a leg of poverty alleviation. 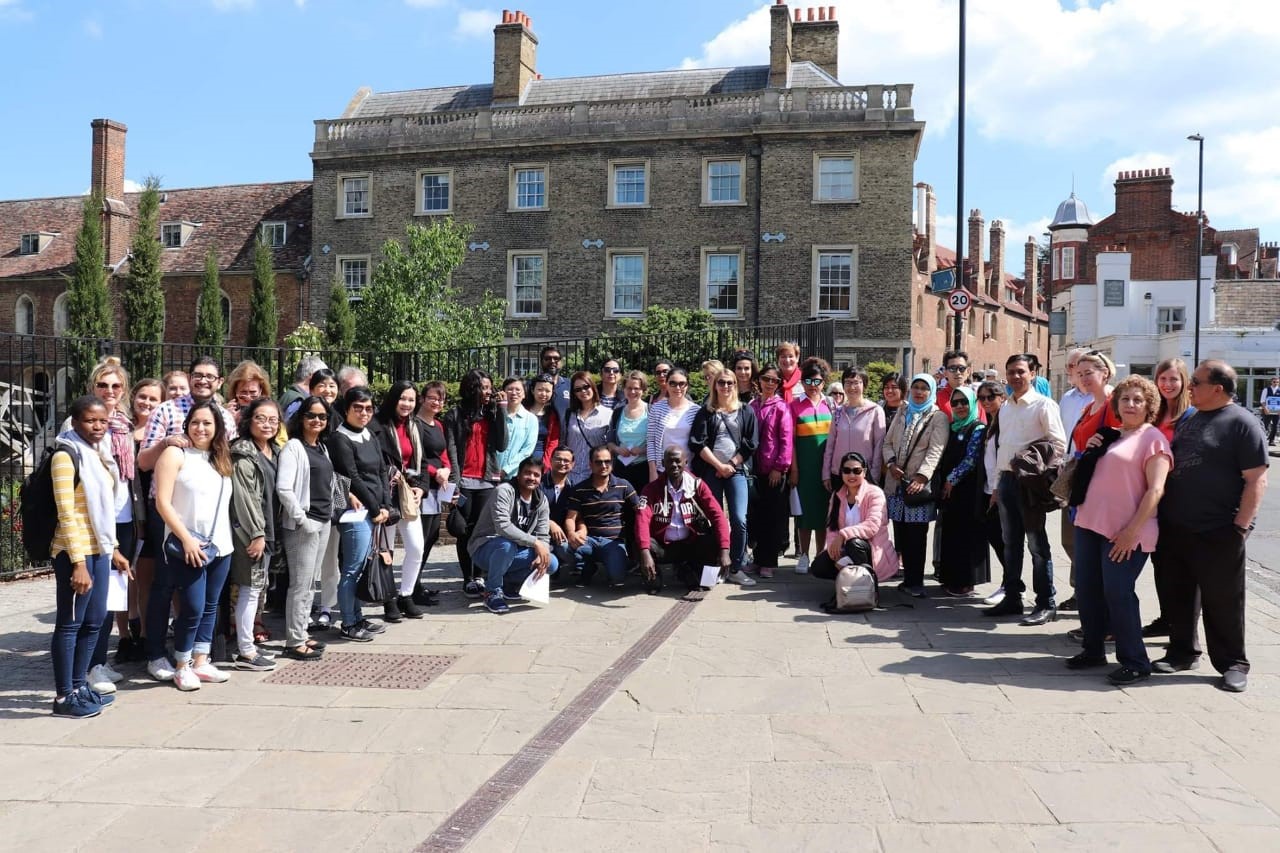 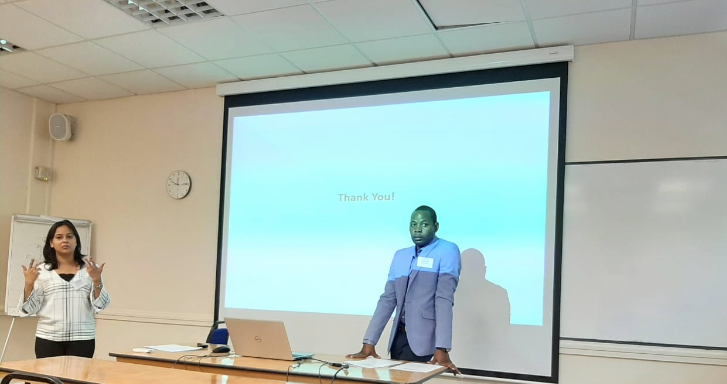 TRADE, in cooperation with TRADE Advisory, hosted a two-day TRADE-DSM® User Group Conference (its fifth one to date) from 12-13 March 2019 for TRADE-DSM® subscribers, as well as selected academics and members of the business community.

The first day of the conference was devoted to sharing insights into some of the latest developments in international trade. Prof Raymond Parsons from the NWU Business School discussed the potential economic and trade implications of Brexit for South Africa. Claudia Furriel from the Department of Trade and Industry provided an overview of South Africa’s position with respect to the African Continental Free Trade Area (AfCFTA) negotiations and the benefits that African countries could derive from a continent-wide free trade area. Prof Ludo Cuyvers from the University of Antwerp in Belgium reflected on the meaning and importance of export promotion, while Victor Munyama from SARS shed light on some of the key issues and challenges surrounding trade statistics in South Africa and the SACU region. Prof Wilma Viviers (director of TRADE) and Prof Babs Surujlal (Deputy Dean: Research and Innovation, School of Economics and Management Sciences) provided opening remarks in the morning while Prof Peet Strydom (extra-ordinary professor in TRADE) summarised the day’s proceedings and provided some ‘take-aways’.

The second day comprised a practical and interactive session on the TRADE-DSM® led by Martin Cameron and Francois Fouché from TRADE Advisory. The purpose of the session was to reacquaint the TRADE-DSM® users with the core workings of the model while also showcasing some of its latest features and applications. Mr Claude Moodley of TIKZN gave feedback on their experiences with the model and also indicated what their current needs were.

See the media release for more information: Big changes loom in Europe and Africa: How will South Africa be affected?

1 March 2019: TRADE participates in an Expert Group Meeting of the AfCFTA in Gabon

Prof Wilma Viviers (director of TRADE) and Martin Cameron (director of TRADE Advisory) were invited to participate in an Expert Group Meeting (EGM) held in Libreville, Gabon on 1 March 2019, the theme of which was implementation strategies for the African Continental Free Trade Area (AfCFTA). The meeting, which was hosted by the United Nations Economic Commission for Africa (UNECA), was attended by policymakers and trade and development specialists from across Africa, including representatives from the Economic Commission for Africa (ECA) and the  African Trade Policy Centre (ATPC). Among the topics discussed were the critical success factors driving (as well as potential barriers to) the implementation of the AfCFTA.

Prof Viviers and Martin presented a paper titled ‘The DSM (Decision Support Model) - an alternative approach to identifying and prioritising bilateral and interregional trade opportunities in leveraging the benefits of the AfCFTA’. The paper was very well received, with several countries expressing an interest in the model and how it could benefit their export promotion efforts.

February saw the launch of TRADE’s ‘Going Digital’ think tank, a forum designed to facilitate regular discussions on digitalisation and the opportunities and challenges it presents for regional and international trade. The inaugural meeting was attended by selected trade experts as well as postgraduate students who are focusing on different aspects of the digitalisation phenomenon. Prof Peet Strydom (extra-ordinary professor in TRADE) provided a broad overview of the digital economy and its various manifestations, while other members of the group shared their views and experiences of this fascinating but complex field. Master’s students, Ali Parry and Lisa de Jager, and PhD student, Khutsafalo Sekolokwane, had the opportunity to present their proposed dissertation/thesis topics to the group and in turn receive valuable feedback and advice on how they could fine-tune their topics to ensure a rewarding study experience.

A follow-up meeting is scheduled for 4 June where priorities will be identified and a work programme formulated.

The first TRADE colloquium of 2019 took place on Thursday 14 February at 10:00 in E3-138. New Master's and PhD students were required to attend this colloquium to present their research problems for feedback.

Past events at TRADE